The Atlanta Fed initial GDPNow Forecast for first quarter 2016 starts of will an anemic 1.2% whimper.

“The initial GDPNow model forecast for real GDP growth (seasonally adjusted annual rate) in the first quarter of 2016 is 1.2 percent on February 1. “ 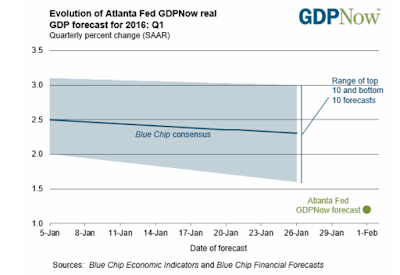 The Atlanta Fed “Final” GDPNow Estimate for the 4th Quarter was posted on January 28.

Strengths and Weaknesses of GDPNow

The strength of the Atlanta Fed GDPNow model is that it mimics BEA calculations, thus providing an advance look as to what the BEA will report.

The inherent and unavoidable weakness in the GDPNow model is BEA revisions. GDPNow mimics a model in which data is revised, revised, and revised again.

Late last year the BEA announced it made a major “processing error” in regards to construction spending. The error affects GDP all the way back to 2005.

We will not know the total effect until July 2016. We do know the biggest errors pertain to 2014 GDP which will rise, and 2015 which will fall.

I discussed the forthcoming construction revisions in depth in When are Construction Revisions Coming?

Moreover, GDP is notoriously wrong around economic turns, like now. It’s highly likely the GDPNow model has mimicked bad data from the BEA that will be revised substantially lower in the future.

If so, the US is in recession now, with the vast majority of economists in Economic Fantasyland.