The US corporate default rate, according to Standard & Poor’s Global Fixed Income Research, soared from 2.8% in January to 3.3% in February, a big jump for just one month, and the highest rate since December 2010, when it was recovering from the Financial Crisis, with QE and ZIRP running at full bore, and with banks and big corporations getting bailed out by the Fed and the Treasury.

And it’s higher than it had been during the early phase of the Financial Crisis in September 2008, when Lehman Brothers filed for bankruptcy, when all heck was breaking lose, when stocks and bonds were plunging, and when the default rate was “only” 2.96%.

But this time it’s different, they reassure us. In December 2007, the default rate was 1.02%. At the time, banks were already cracking at the seams. Bear Stearns would soon pop. The Financial Crisis was visible on the horizon. And the economy entered what would later be called the Great Recession. By November 2009, nearly two years later, the default rate peaked at 12%.

These aren’t overnight fireworks. Credits take their time to react.

But then newly created money surged through the system. What followed was the greatest credit bubble in US history. By July 2014, the default rate had dropped to 1.4%. That was the peak of the Fed’s fanciful handiwork that had “saved” the economy, an era when even the riskiest borrowers could get new money to fill their financial sinkholes, when bankruptcies had become rare, when the business cycle had been abolished, and before the price of oil fell off the cliff.

Then it all came unglued again. And in February, S&P’s US trailing-12-month speculative-grade corporate default rate finally accomplished the feat and jumped above the rate of the Lehman-moment: 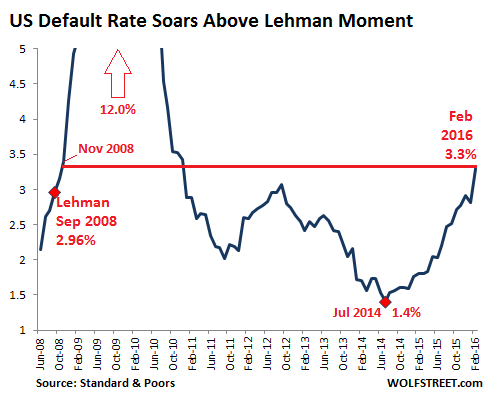 Rather than letting the enormous and increasingly onerous pile of corporate debt blow up and get restructured, at the expense of bondholders and stockholders, the Fed, in its infinite wisdom, made sure that this debt, plus even more new debt, would get carried forward to burden companies and the economy overall for years to come. Hence the lousy recovery.

Stressors in the form of persistently low oil prices, the beginning of tighter monetary policy by the Federal Reserve for the first time in nine years, and slowing global growth likely will produce more defaults in the next 12 months.

In its “pessimistic scenario” — “if global economic and financial headwinds continue on their present course” — the default rate could jump to 5.2%. That would match the rate in February 2009 when it was on the way to 12%.

What pushed the default rate up in February were 11 defaults by S&P-rated companies, seven in the energy sector, two in the financial sector, one in the leisure/media sector, and one in the high tech/office equipment sector. These are the desperate debt sinners of the month:

Credit agencies are trying, belatedly as always, to catch up with reality. And now downgrades are hailing down on Corporate America: In February, S&P upgraded only 20 companies with $103 billion in debt, but downgraded over five times as many, 110 companies, with $399 billion in debt.

These companies are, for all practical purposes, excluded from the capital markets. When they need more money and cannot raise it, they might have to default on their existing debts. Hence the soaring default rate.

The collapse of lower-rated junk bonds is now having nasty “spillover effects,” as S&P called them, on higher-rated junk bonds and even on investment-grade bonds, whose yield spreads widened to 868 and 254 basis points respectively (8.68 and 2.54 percentage points).

As the bond market comes unglued from the bottom up while contagion spreads far and wide, stocks are going to have a rough time, regardless of whatever thrilling rallies appear out of the fog. The basic reality is this: When a company gets in credit trouble, stockholders, who are at the bottom of the capital structure, are the first to feel the pain; and when it defaults, stockholders often get completely wiped out.

And so “distress” in bonds has spiraled into Financial Crisis conditions. Read… Now It’s Even Worse Than it Was When Lehman Collapsed, But It’s “Contained”