Gift tax returns are notoriously overlooked. Many fail to report gifts to family members larger than the $13,000 allowed to each person annually. Curiously, gift tax returns are also among the most under-audited by the IRS. See Avoid IRS Audit Triggers.

Big Lots Flexing Into Earnings, Overstock May Backfire For Bulls

Wells Fargo & Company will offer a new mobile application for its brokers in 2012 to address a growing need for new advisor tools in digital media.

The world oil market is growing “increasingly tight” at a time when the U.S. is looking to impose fresh sanctions on Iran over its nuclear program, U.S. energy officials said.

Every year in February, the Treasury department releases its adjustment to foreign purchases of Treasury bond holdings as of the previous June (with revised and overriding estimates for all the intervening months in the interim, as well as previous monthly forecasts). It did that earlier today. And while many may have been expecting the revision to s…

The LTRO is a craneAttached to an opposite trainWill this sucker go?Do snakes like the snow?Are Greeks now enjoying their pain?
The Limerick King

Does Anyone See This Emergency As An Emergency, Or Is A Half Trillion Euro Pay Day Loan Bullish?

Since the amount of coverage the Dow 13,000 has received on CNBC indicates that it is clearly the indicator for half of the actively trading population in America to hang its hat and retire, we can only commiserate with the retirement planners of America who have had to do only to undo retirement plans for all of 7 people give or take (as we said, ha…

Criminal authorities are investigating whether a top Goldman Sachs manager passed inside information about technology stocks to the firm’s hedge-fund clients.

The 5 Things You Need To Know About Retirement Plans

Many of us are covered by one or more types of defined contribution retirement plans, such as a 401(k), 403(b), 457, or any of a number of other plans. What many of these plans have in common is that they are referred to as Cash Or Deferred Arrangements (CODA), as designated by the IRS.

Oil and gas prices are high now for a very simple reason: the Fed has gone on a campaign to push up inflation and push down the value of the U.S. dollar. Just last week on CNBC James Bullard the President of the Federal Reserve Bank of St. Louis, stated this unequivocally. What is overlooked is the degree to which an inflationary policy at home creat…

Capitalizing on Cambodia by Mark Mobius of Franklin Templeton

Cambodia has been making strides into the capital market arena. The government has been encouraging foreign and local investment. Eventually, the local capital market should follow suit. The Cambodia Securities Exchange opened last year, making it one of the last Southeast Asian nations to open a stock exchange. Neighboring Laos opened its bourse in …

Generations ago, people had large families, ensuring an adequate supply of labor to work the farm and provide a comfortable retirement. Now, families are small and we face a mountain of debt and soaring deficits. This months Fundamentals examines the implications for the economy and investors portfolios.

This week, with European financial crisis almost in our rear view mirror, it is the price of oil that is leading the economic worry race. This worry race has seen more lead changes than the Republican Primary. Worrying about the economy is our new Cold War. We believe, that like the Cold War, this too shall pass.

A Tailwind for Gold? Low Rates by Russ Koesterich of iShares Blog

In recent months, the Fed and the ECB have been lowering-or maintaining low-interest rates in an effort to support growth. One unintended beneficiary of the aggressive easing by the developed worlds central banks: Gold. Historically, the most important driver of gold returns has not been inflation or the dollar, but rather the level of real interest …

2012: A Year in the Global Economy by Azad Zangana and Keith Wade of Schroder Investment Management

Global growth is set to slow further in 2012 largely as a result of the euro crisis. On the positive side, two factors should support activity in 2012. The first is a fall in inflation, which will support household real incomes leading to stronger consumer spending. The second is the strength of the corporate sector; companies have stockpiled cash an…

Theres a significant disconnect between what investors say is the right approach and how they invest in reality. Many funds claim to be long-term, but the average holding period for the average stock mutual fund is only 10 months. Part of the reason for this dissonance is the incentive for fund managers to invest a particular way to attract instituti… 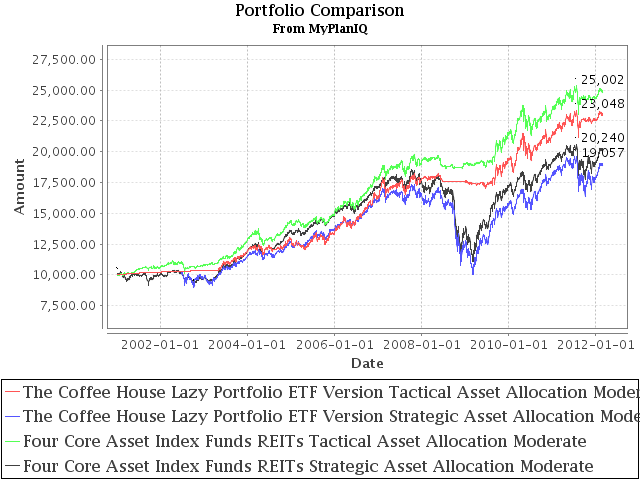 Bill Schultheis’s “Coffeehouse” portfolio is a 7-fund portfolio popularized by Bill Shultheis’ book. This portfolio is a moderate risk portfolio with 40% in an intermediate bond fund and in equal weight 10% in 5 risk stock asset classes. Large...

Why Is the Financial World So Messed Up?

Why is the financial world so messed up? Because it’s run by Central Bankers. And those folks view money very differently than the businesspeople who create businesses, jobs, and wealth.

For your average Central Banker, the professional relationship between money and risk is a distant one. This has much to do with the fact that your aver…

Dow Closes Below 13K For The First Time Since February 27, 2012; Flash Crashes

Risk off. On one of the highest volume days in months (for equity cash and futures), ES (the S&P e-mini futures contract) fell over 20pts from high to low following Bernanke’s lack of expansionary comment. Right at the close we accelerated very fast losing around 6pts almost instantly as the market had a very jittery feel. The major financials we…